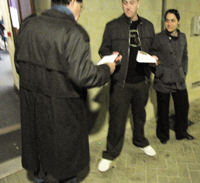 "Scientific Guide" To The Skeptics Handbook

I’m elated. Last night outside the Watts Up lecture at UWA here in Perth there were people handing out a so-called “Scientific Guide” to the Skeptics Handbook. Let’s put this in perspective, I wrote the Handbook two years ago, and it’s taken this long for those-who-want-to-scare-us to put together a specific printed response. I’m an unbacked, solo pro bono writer, and they needed no less than 5 professors, 2 associate professors, and 21 months, and THIS is the best they can do?

I’m also chuffed. The infamous Professorial fellow Stephan Lewandowsky spoke the night before in the same room as we spoke in (about the dangers of consensus) but maybe he’s finally read my multiple responses to the stone age reasoning he was using and the light bulb has gone off. Maybe he’s realized that the masses of engineers, geologists, lawyers, medical experts and people with just plain common sense out there are never going to be fooled by his old witchdoctor routine about the Gods of Science at the IPCC. I was informed by people who saw the presentation that for the first time he spoke without resorting to obvious errors of reasoning. 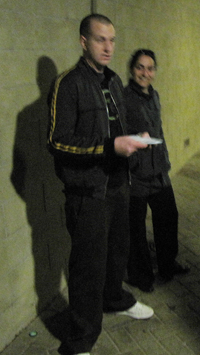 Handing out the Guide

Likewise the Scientific Guide makes a lot of whitewashy mistakes; still won’t show the graphs I show; confoundingly obscures the “fingerprint” that was presented by Santer and the CCSP, and makes baseless assertions, uses graphs with dodgy scales, assumes that positive feedback occurs and throws in a venetian blind strawman. Nonetheless, finally Professors are rising above Argument from authority and ad hominem attacks. The word “Denier” has disappeared.

Lewandowsky, Carmen Lawrence, et al, your apology for calling us names is accepted. We’re delighted that you are finally willing to try to discuss the evidence.

Ladies and Gentlemen, this is excellent news. For those of us without the backing of any major institution or company taking on the wall of money, as long as we have free speech it shows we can use satire as a scyth backed up with impeccable reasoning and empirical evidence and force our public officials to lift standards and stop bludgeoning us with blatantly obvious mistakes.

I’m happy at the way the Skeptics Handbook still holds up. Most of the critical response to it is to repeat the evidence that supports a direct effect of carbon, which (as I have said many times) can only give us about 1 small degree of warming, not 3 or 4 disastrous degrees. So the critics have stopped breaking laws of reason, but they haven’t quite got numerate yet.

I will do a full detailed response to it, of course, along with the other (un)SkepticalScience.com postings. But given that there are at least ten of them, and one of me, regrettably, I can’t do it all today.

PS: At the door last night I spoke to the people handing out the written reply to the Skeptics Handbook (a reply which doesn’t appear to have a named author, yet has the UWA logo on it). As usual, the conversation dissolved quickly into endless spiral of non-sequiteurs that don’t add up.

I joked that it was good to see Sherwood get a mention, I think his idea to use windshear instead of thermometers is entertaining and creative… the man in the middle scoffed, “havent you seen the three papers that came out last year?” I ask “which papers”. He says, you know, the three… I repeat: Which papers? Can you name them? He’s says “Yes”. Then reaches for his blackberry to sms for help. Ha, I laugh, so you haven’t even read them? He admonishes me for being rude. “What kind a response is that!?” The woman next to him seems utterly dumbfounded by me: “You just don’t get science do you? You don’t get it?” I’m thinking it’s not even worth asking her what she thinks science is… (give me the evidence). Then the pair are asking how many papers I can name. I laugh that counting papers is not how it works. They complain that it should be me naming papers and backing up my claims, and I point out that they’re the ones who want our money, they need some evidence. The man is incredulous, “but but! HALF* the solutions to the problem won’t cost anything, they’re free”. I say: Great, fantastic, so why don’t you go do them then? Cheap energy. The market will love it. So why the big scare? Who needs carbon trading…?

Ugh! He groans: they’re free if you include the costs of the damage.

Oh right, I’m thinking. That would be the damage due to “carbon”, and the catastrophic positive feedbacks that the IPCC can’t really name any convincing evidence for?

* Apparently it was “Half” the solutions, not all, so I corrected that post note. see Justin in comments… . It’s all based on assumptions in any case.