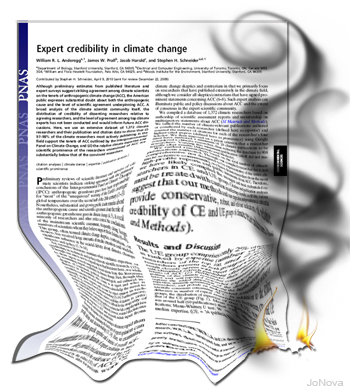 To natural born critics AGW is the gift that keeps giving. It would be cruel to say these papers all exhibit unworldly qualities because that is inevitable if your purpose is to generate a virtual reality with computer modeling. But, as the old saying goes, you have to be cruel to be kind; so some of these papers are speculative and unrealistic; others are eristic and the rest egregious in intent or execution. A scientific theory such as AGW is, like all human endeavours, only as good as its best examples; the following papers, all peer reviewed, represent the best of AGW. The papers are in no particular order, or lack thereof, of merit.

Part I and Part II of The Worst Papers according to Cohenite. Conversely: Ten of the best

Consensus is the last refuge of a scientific debate and it has been a mainstay of every media and political commentator with fairy floss between his ears and a desire for the glory of covering the end of the world or saving it. Fortunately a science theory is like one of those black balloons; it only takes one sharp rebuttal to deflate it. The thesis of this paper is preposterous and antiscientific; pro-AGW papers outnumber anti-AGW papers therefore AGW is true; the paper uses consensus to prove consensus; another AGW perpetual machine.

This paper is not just poor, it’s embarrassing that PNAS would even publish it.

2. On the reliability of the U.S. surface temperature record

It’s not exactly plagiarism to use someone else’s concept, it’s not unethical to beat someone to publish, it’s not the end of the world to get the point wrong because you use only a minority of the data, even if it appears to vindicate the official point of view about the efficacy of the land based data. But 3 strikes is still 3 strikes.

Dr Foster and his merry band were decidedly unmerry about McLean et al’s paper. Foster was upset because they thought McLean detrended the temperature trend to prove that CO2 did not produce a trend. That would be silly. What McLean did was to detrend CO2 to establish the natural variation of temperature was dominated by natural things like ENSO with a 7 month lag. This was perfectly reasonable; people do the opposite all the time, which is to detrend ENSO so a supposed CO2 trend can be found. What Foster also missed was the significance of isolating natural variation so that its contribution to trend could be analysed. That is natural variation asymmetry all of which is explained in David Stockwell’s excellent comment on the McLean paper.

Equilibrium sensitivity is one of the big hopes for AGW; it says if things are not bad now they will be. Later on. After a cup of tea and a good lie down. The paper starts well: “Uncertainty in climate sensitivity is a fundamental problem for projections of the future climate.” A welcome admission of uncertainty; but then the rot sets in: “The greater the uncertainty that is considered for radiative forcing, the more difficult it is to rule out high climate sensitivity, although low climate sensitivity (< 2°C) remains unlikely.” This is the precautionary principle; we’re not certain about anything, but we’re certain things are going to be bad.

Some serious speculation takes place in this little effort, alternate universes. Meehl and his heavy hitters claim the 1976 climate shift, which is presented by sceptics as evidence that AGW has no effect on temperature, was in fact delayed by AGW and would have happened much earlier. Forget that the ’76 shift dovetails perfectly with PDO and major oceanographic events; forget that for AGW to prolong the advent of the ’76 shift means that AGW would have prolonged a cooling period; this is a major example of 2 dominant modus operandi coming from the AGW camp. Firstly revising the past to be consistent with AGW theory and removing contradictions like the ’76 climate shift. Secondly, claiming major climatic processes as being changed or ‘possessed’ by AGW.

6 Proof of the Atmospheric Greenhouse Effect.

Arthur is as smooth as his counterpart, Arthur Daley and a formidable scrapper. Unfortunately, the 2 paradigms of his elegant paper are now more Minder than Arthur The first of Arthur’s paradigms is global average temperature [Tave] used as a metric of the Earth’s energy balance [EEB]. In Arthur Daley’s parlance Tave is now flowers and frolics, done over by a little equation: : (A + B)^4 > A^4 + B^4. This equation simply means that changes in the Tave cannot properly represent how much radiation is leaving the Earth because a change in temperature at a cold region has less radiation effect than a temperature change at a warm region. The second of Arthur’s paradigms looking flimsy is that atmospheric pressure does not contribute to atmospheric temperature. Again, another little equation, (PV – nRT), which says the atmospheric temperature at any height is a function of the local pressure, or vertical mass does the trick [thanks to Williamcq and Leonard] There’s still a greenhouse which sets the emission level at the top of the atmosphere like a star on a Christmas tree but like a Christmas tree, the greenhouse effect is supported by a much bigger tree of factors. Straight on gov!

Climate sensitivity is a bidding war and Sal’s piece is a typical bit of one upmanship. Forget the IPCC forecast of 3.2C with 2XCO2, the sky is now the limit. Sal’s effort is particularly resonant because it looks at the ocean where Cazanave and Ablain have produced papers showing no steric increase in sea level. So, we’re back to square one: Trenberth’s Croix de Coeur, “where’s the missing heat?”

8 An adaptability limit to climate change due to heat stress

Forget Sal’s 7C [‘confirmed’ by a crew from MIT no less], she has been raised by this effort of 12C! The only consolation is that at this level of heating there will be plenty of water from the melting poles to cool us down. This is serious scaremongering and it is good to see the name of Sherwood back in the lights.

(So this assumes the worst models are right.and everything after that might make sense if only it wasn’t based on an assumption known to be false.)

9 Weakening of tropical Pacific atmospheric circulation due to anthropogenic forcing

Vecchi is the past master of seeing AGW in the major climate processes; you name it, El Nino, SAM, AMO, the Walker Circulation and he will find it altered due to AGW. David Stockwell summed up the Vecchi logic as this for global temperature (GT) and Walker Circulation (WC):

So, has the Walker Circulation declined? No

Gerhard Gerlich and Ralf D. Tscheuschner’s [G&T] original paper falsifying the greenhouse effect caused a lot of ripples. It’s probably best thought of as a composite of ideas which cast doubt on the means to measure a greenhouse effect. But since it queried the prevailing orthodoxy it has received the full treatment, culminating in a formal response from Arthur and some other well known luminaries G&T replied to Arthur’s posse and amidst the heated exchanges was this cutting conclusion from G&T’s response to their tormentors: “They do not even define a greenhouse effect that they wish to defend.” Sometimes the most simple things are NOT best left unsaid. So, Arthur, what is the “greenhouse effect”?

I have left out many other worthy contenders. Of special interest are those papers which have a conclusion that is contrary to AGW but where the ubiquitous disclaimer that AGW is still alive and well is included in the paper. AGW may not be real but its influence is.