Mr OAKESHOTT, Federal Independent Member for Lyne,  talked about the failure of the Carbon Pollution Reduction Scheme in the Australian Parliament, and wanted to name and shame those responsible:

“I take this opportunity to raise the issue of the smoking guns that I have seen over the last six months. I smelt a rat in the shift that I saw and what looked to be—to their credit—a very well organised and very well-funded campaign from the likes of JoNova and Viv Forbes.”

Golly — I’m a smoking gun, a smelly rat, and a paid mercenary of undisclosed groups, and Viv Forbes of Carbon Sense is too! 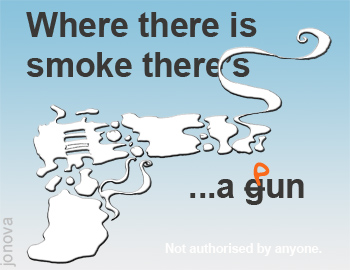 I’m bowled over by the compliment. Is he really giving me and Viv the joint credit for the sweeping poll changes? (As if). I’ll just ask my PR department (me) to arrange with my cartoonist (me too) to throw together a parody of parliament, which the web-editor (me) can code into a page. All of us are delighted to be described as well organized. (It’s true we communicate like we are all in one head.) **

We’re a bit confused about the “well funded” term though, since we write pro bono, and are essentially a charity operator. My husband is generous, and supporters toss donations in the tip jar (thanks greatly to you all). The donations so far cover the  bandwidth and site costs, but not my time … yada yada yada, no salary, no paychecks. There is no chance anyone of sane mind would do what I do to get rich. But it is intrinsically satisfying. Thousands of people who share my point of view have emailed me to say cheerio and thanks. I’ve met top-notch people, and if I could just get away, I’ve got offers of houses, apartments and spare rooms in Adelaide, Hawaii, Seattle, Washington, Scotland, Florida, and the list goes on. In a way I’m powered by positive feedback, which is all the more ironic, since I’m such a champion of feedback that’s negative (the climate kind).

Am I mad? Possibly.

Doesn’t it occur to Oakshott that precisely because I don’t have a major news-mast, government department or corporation behind me, I can’t really afford to be dull, boring or wrong?

Why do I do this?

I hate to see a good civilization going to waste.

Plus I’ve got an odd skill set: science, media, pro speaking, and an ability to think. (I don’t understand why this seems so rare among the intellectual class. I swear I am just connecting the dots that should be obvious to anyone.) Bizarrely, I have also done graphic design and cartooning, and I used to be a Green activist. With that kind of CV, not many career paths make sense. Debunking illogical intellectuals in scientific blog-land is just about it.

Surprisingly, Oakshott used to be a Nationals Member (conservative). He has his own blog. If anyone wants to try to sum up his two pages of speech into a coherent paragraph, be my guest.

Thanks to Viv Forbes for letting me know of our joint success (and for that spy J who spotted it).

*Well organized? Anyone who knows me knows I’m not. (Can I take this moment to say sorry to the thousands of people who have emailed that I have not quite responded too (I’m there in spirit)… if you email me, please be careful with keywords in the subject line. There have been people I want to reply to but can’t. I forget their name, and the keyword was: Re, my post title – so I’ll never find it among the 17946 emails in my intray. (That’s down about 2000 on last week when I cleared a lot out.)

** And it’s late, we just settled for a decoration–cartoon. Wallpaper stuff.

Edited July 2014, because nothing is ever perfect.