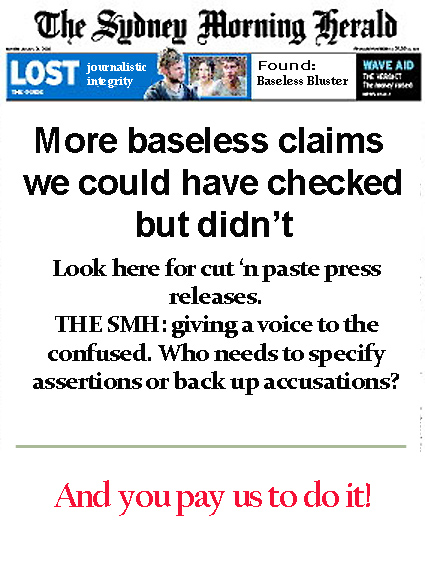 I realize non-Australian readers are only so interested in the mining tax debate down-under, but the techniques for an unfair fight are the same everywhere. Instead of answering green-socialist-autocrats on their own ground, we need to raise the debate and expose the way they add confounding fog.

There are rhetorical tricks that friends-of-Big-Government use to promote their own political aims. They reframe debates entirely, and are expert at pouring confusion. Watch how these coalition of Green-Unionified groups appoint themselves as speakers for the people, then ignore the people, they create a false conflict, and turn groups of productive entrepreneurs and hard working employees  into an inanimate entity (the enemy). Read between the lines, the voters are turning away from the option these advocates prefer, therefore the public are easily misled (code for not-too-bright, you know, easily fooled by adverts from billionaires).

Which comes from AAP, which took most of it and rephrased bits from the ACTU media release.

A coalition of national organisations, representing social services, workers, environmental and consumer interests, have called for the voices of ordinary Australians to be heard in the mining tax debate.

The argy-bargy over the proposed Resources Super Profits Tax (RSPT) is being dominated by taxpayer-funded government advertising, and that of powerful vested mining interests.

Prime Minister Kevin Rudd is under pressure to give ground to the miners, as polls show the battle is hurting Labor in the electorate.

But the ACTU, Australian Council of Social Services (ACOSS), Australian Conservation Foundation (ACF) and Consumers’ Federation of Australia on Monday urged the government not to baulk at necessary reforms to make the tax system fairer.

Without the tax, it would be left to ordinary wage earners to make up the shortfall in government revenue, the groups said.

As for ACTU (Australian Council of Trade Unions) they can hardly be described as working for their members whose jobs are at risk. Instead they’re working to save their own power and status in the political arena. Since the unions are officially tied to the ALP (the Labor Party) they’ll do anything to try to rescue their team (and influence) in government, even if it means sacrificing their own members. Union officials have their careers to think of after all…

Running a country ought to be about negotiating between all the interested people to see how we can find some balance that is bearable for everyone. This commune-of-the-confused instead pits this as a battle, a war (don’t give in!) between the people and the mining entities. But the mining entities serve the people, are made of people, and already pay money to the people in the form of profits, salaries and taxes. Half a million of those taxpayers are also shareholders and these shareholders are some of the largest payers of tax there are. There is no neat division (though it may seem like it if you earn your salary from government grants or from donations from people who earn theirs from government largess).

The green-union groups paint the situation as a two-horse-race where one horse gets to pay for the euphemism called a “revenue shortfall”. They make out that this is about people versus companies (“powerful vested interests”), yet forget that companies don’t have brains, can’t vote, and if there were no skilled humans putting in the work, taking the risks and making the effort, the mining company would be at best a slab of words on paper; at worst, a failed venture. In short, miners are people too.

Plus there are an infinite number of horses which could be in the running in this race.

Speaking of “shortfalls” in revenue…  really this is code for the vast sums of money squandered by the government in stimulus packages. They’ve relabeled the massive debt ($40 odd billion dollars) that Rudd created from a surplus as a “revenue shortfall” as if the money needed to repay it was money that was already coming in, instead of new money that needs to be sucked out of something.

And what happens to that imaginary revenue if the new tax crushes the mining industry (as just about everyone associated with the industry suggests), how much tax can the government extract before the independent consenting adults leave Australian mining to use their skills and capital elsewhere?

The government makes out like it can take money back from those nasty (and gullible) foreigners, but forgets that those foreigners don’t have to own Australian shares and provide the capital for Australia’s mines. In a global market they are free to put their money into safer bets like say Chile or China.

According to the anointed, free speech is “fine”, but if they don’t like the message, they’ll ignore it’s content and attack the messenger.

“Mining magnates are putting at jeopardy improved superannuation savings for the workforce of more than 10 million, billions of dollars of infrastructure spending that our nation needs, and a cut to the company tax rate for 770,000 businesses,” he said.

So miners are not just speaking, they’re “hijacking”. Miners being all super rich magnates of course, and not thousands of mum and dad shareholders and workers. In the twisted PR-world miners are not the industry the creates 37% of our exports which keeps most super-accounts alive and kicking, instead they’re jeopardizing the super (that they helped create).

“The RSPT misinformation being spruiked by the big miners is a disgrace.”

What particular “misinformation” would that be? Nowhere is there any specific description. If there is misinformation, then it’s in the public interest to have it spelled out, but otherwise this is just a baseless claim that amounts to nothing more than waste-our-time-bluster. The miner’s information is coming from big name auditors like KPMG, from the latest Tax Office information, and from their audited company accounts (which, if wrong, can led to jail terms for company officers). The anointed are using a foreign student’s research, six year old tax data, and the best spin their PR team can muster.

What’s a news service for?

Quality news? The SMH, which reprinted this press release, does the country no favours by unquestioningly being a voice-piece for the confused. If AAP or the SMH were real journalists, they would have rung the coalition and asked for specifics to back up the big claim. If there are none, then they should either ignore the bluster, or print it with the reply about the specifics as well. Newspapers ought to give every interested party a voice, but “quality news” means helping to clarify exactly what the claims are and substantiate them. This is when the media serves the people.

One of my central philosophies with communicating science is that the more complicated the topic, the simpler the language has to be… and this applies just as much to an economic or political debate too.

Sloppy communication is a weapon against the people, wielded by those wishing to deceive.

H/t to Linda M for the SMH story. Thanks!