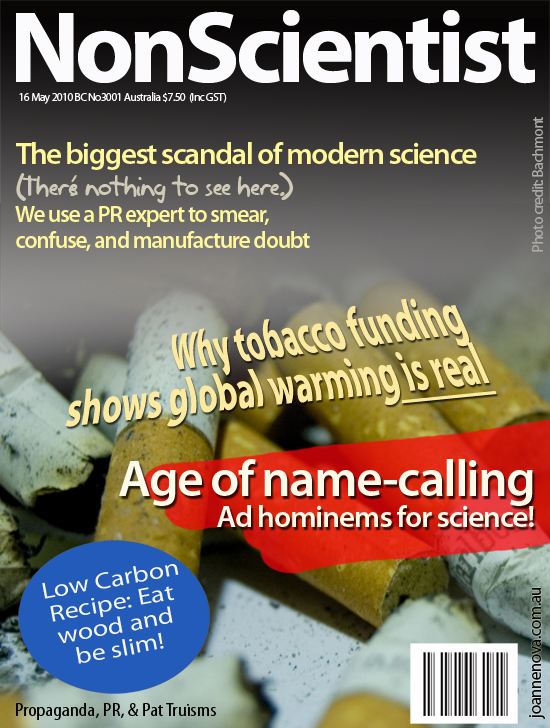 New Scientist plumbs new lows. The magazine has become its own self-parody. Do they see the irony of inviting a PR expert to accuse groups of committing the crime of, wait for it, … using a PR expert?

Don’t get me wrong, I don’t hold any elitist ideas that only people with science degrees can write for New Scientist (the magazine and its staff have pretty much proven how useless a science degree can be). My issue with them is that Richard Littlemore (a PR expert) has essentially written a smear-by-association piece, which should have no place in a real scientific magazine. It’s not like Littlemore is just an unhealthy part of a big healthy debate — instead he’s the advertiser being offered free editorial space within the one-sided propaganda that masquerades as journalism.

New Scientist may think climate science is a moral imperative, but they don’t have room for the climate scientists who have published peer reviewed criticisms of their favorite theory. Nor do they have space to tell the extraordinary story of the grassroots independent retiree scientists who’ve busted the biggest scientific scam since the Piltdown Man.

Instead of PR hacks, why doesn’t New Scientist let Patrick Michaels write a column, or Roy Spencer, or John Christie? Couldn’t they do a feature on Richard Lindzen, Steven McIntyre, Anthony Watts, or Henrik Svensmark? Evidently, smear-by-innuendo is more important to this rag than scientific evidence and logical constructs.

Littlemore claims people are trying to “cloud” scientific debates, and then does all the things he accuses others of. It’s psychological projection run riot. His contribution to scientific knowledge amounts to throwing stones in the air which could just as easily land on him.  He talks of “Manufacturing Doubt” like it’s a sophisticated ploy used by marketing gurus instead of a cheap trick that even preschoolers use. Sure, creating confusion and discussing irrelevant points is a strategy that some corporations use to hide the truth. But it seems to work pretty well for popular science magazines too. Anyone want to hide the collapse of their favorite theory? (I’ll help you understand our climate by informing you of ancient tobacco company PR techniques, OK?)

They’ve produced a whole Special Report based on name-calling, backed up by old irrelevant information, and penned in part by a person with an undeclared conflict of interest.

As ad homs go, Littlemore is firing blanks in any case. He’s beavering away, trying to cast doubt on all climate skeptics by associating them with Big-Tobacco, and a corporation called ICE that no longer exists. He’s got no evidence that current skeptics are funded by big-oil (and this skeptic sure isn’t), only vague allusions and innuendo. On the “Manufacturing Doubt” scoreboard there’s a big tick for New Scientist: Seed the idea that anyone who speaks against the editor’s favorite hypothesis is funded by vested interests.

Littlemore can’t even expose modern conflicts of interest (because those all go against his Team). Instead he does a form of ad hom so old it’s archaeological, and even at the time it was hardly a crime. The defunct ICE committee’s dastardly purpose was (shock me) to “reposition climate change as a theory not a fact”. Since the idea of man-made global disaster is technically not even a theory, but a speculative hypothesis, you could argue that ICE was doing AGW a favor.

And Littlemore leers vaguely at these old vested interests without mentioning that he has proven and obvious vested interests of his own. He runs DeSmogBlog, supported by James Hoggan and Associates, whose clients include David Suzuki and renewable energy companies. The DeSmog smear-a-scientist blog’s supporters also include EnergyBoom – which makes money when people put their cash into renewable investments (i.e. the kind with not much energy, and definitely no boom). Not only is Littlemore scientifically illogical and illiterate, he’s a hypocrite, and so is New Scientist.

Curiously, to “balance” up the toxic ad homs, New Scientist throw in some pat truisms of science, which they hail in theory but toss out the window in practice.  Things like, Living in Denial: The truth is our only weapon. Sure. Let’s talk about “truth” in a magazine that’s still defending the Hockey Stick fully five years after it crashed and burned and even after the IPCC has gone quiet on it. “Truth” is telling people that hundreds of studies show a medieval warm period, and that Michael Mann’s graph depends on a species of tree which grows faster as CO2 rises. “Truth” is printing photos of surface stations measuring temperatures next to vast tarmacs.

As the rest of the world shifts the goalposts and pretends to be concerned about something else, I predict New Scientist will be the last “mag” standing, still forlornly waving the AGW flag.

Living in Denial? This formerly great magazine sure is. They’ve produced a whole Special Report based on name-calling, backed up by old irrelevant information, and penned in part by a person with an undeclared conflict of interest. The Age of Ad homs continues, and the decline of science communication accelerates.