“Watts up with the climate” 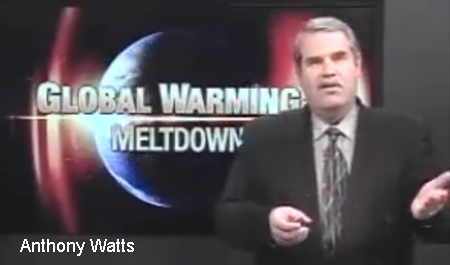 In years to come history books will be written about the grassroots scientists with next to no resources except their wits, who blew the whistle on the biggest scientific scandal of the century and changed the course of billions of dollars, and thousands of careers. Anthony Watts is one of those key men. We’ve hit the jackpot here in Australia: we’ve got a chance to hear him speak. His site Watts Up With That gets a whopping 3 million hits a month.

Anthony Watts is a TV weatherman and meteorologist. He started a volunteer movement with over 650 people who’ve inspected and reported on over 1000 of the surface stations in the US Historical climate network (USHCN). This is a network managed by NOAA with a four billion dollar annual budget. The volunteers achieved what big bureaucracy couldn’t or wouldn’t do.

The grave state of the USHCN was exposed with photograph after photograph. The network has impeccable standards on paper, but only manages to meet them 11% of the time.

His ground breaking report is written up here: “Is the U.S. Surface Temperature Record Reliable?”.

My short summary from the Skeptics Handbook is here: The main “cause” of Global Warming is air conditioners.

There’s a YouTube interview with Anthony and Johnathon Coleman which shows site after site from his survey. You don’t need to be a scientist to see why these temperature gauges are measuring something other than global warming. 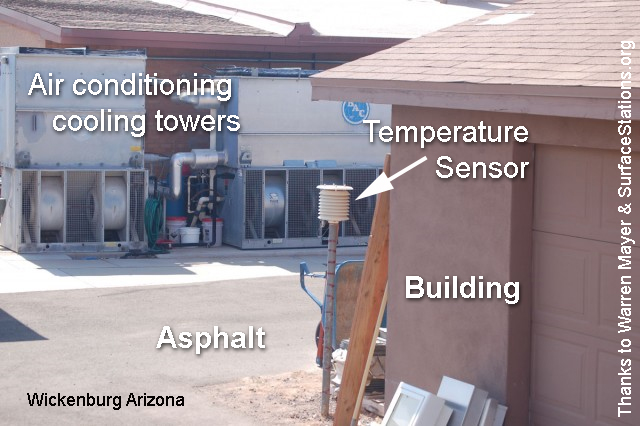 Wickenburg Arizona Surface Station: where you can get an accurate measure of a parking lot temperature (warmed by industrial air-condtioners).

Anthony Watts teamed up with Joe D’Aleo to write a paper a few months ago with devastating examples of how we’ve been deceived through manipulation of data. Seventy five percent of temperature stations have been dropped from the compilations in the Great Dying of Thermometers.

The great David Archibald is touring with Anthony Watts. Another self-starter with initiative, David is a journeyman scientist, trained in geology. He was working as a mining stock analyst when (a bit like Steven McIntyre) alarm bells rang as he listened to the Global Warming message. He tells me he recognized the language as the same spin people use to sell dodgy stocks and projects. David lives in Perth, and yes, we’ve become good friends since we met in Bali (at the UNFCCC).

Over the last few years David has had a better track record of predicting solar activity than NASA. His book Solar Cycle 24 came out a year ago. He was the one who created the first public log graph that graphically captures just how little effect extra carbon directly has on global temperatures. He published a paper in Energy and Environment in 2006 drawing attention to the connection between the length of solar cycles and global temperatures. He recently wrote about the solar flux predicting cold years to come on Watts Up.

He also proudly won the Iowahawk Champion Carbonator of 2008 thanks to the carbon contributions of his car and boat. His effort was a hands-down winner before the competition even closed: “I drive the convertible down to the boat, fire up the two 620 hp turbodiesels then push up a wake that can be detected from space.  The fuel tanks are 1,000 liters a side.  The engines are marinized Mack truck engines.”

David is a straight talking character who tells it like it is.

Stockwell runs a very well respected blog — Niche Modeling. He’s an expert on modeling ecological niches, published multiple times in top journals, and his blog reflects his in-depth knowledge. He’s a no fuss, hard numbers man: Show me the evidence. One of his key aims is to get predictions right and he keeps tabs on his scorecard vs AGW. He has been vindicated many times.

I’m sorry I won’t get to meet him this tour. His blog is one of those with hard-to-earn-kudos for discussing difficult topics, and always with faultless logic.

Joined by a who’s who of other Australian Skeptics

A range of other skeptics, including myself, will join in the tour for parts. I would have done the whole 18 towns too, if only I didn’t have other commitments.

The Climate Sceptics Site has all the details.
Prices: $25 per person, $20 if you make a booking or are a pensioner
Just $20 in smaller towns and venues.

Tara Ballroom, The Irish Club, 175 Elizabeth Street, Brisbane
Anthony Watts, David Archibald and Bob Carter
$25 per person, $20 if you make a booking or are a pensioner
Contact: Tony Gomme 0413 100 055

Institute for Private Enterprise, 6/112 Millswyn Street, South Yarra
Anthony Watts and David Archibald
$25 per person, $20 if you make a booking or are a pensioner
Contact: Des Moore (03) 9867 1235

Social Sciences Lecture Theatre, University of Western Australia
Anthony Watts, David Archibald, Jo Nova and Bob Carter
$25 per person, $20 if you make a booking or are a pensioner
Contact: Book with a message (08) 9487 0404 *And email me if you might be able to help on the night (joanne AT “this site”.com.au)

Labor Club, Chandler Street, Belconnen
Anthony Watts, David Archibald and Tim Curtin
$25 per person, $20 if you make a booking or are a pensioner
Contact: 0401 772 857