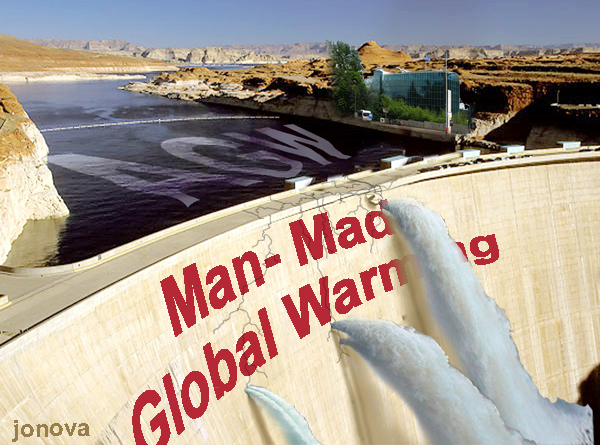 This is it: The dam wall is breached.

There are defining moments in any era, and we are right now in the midst of the Great Collapse.

The weekend before last, a magazine cover called it Fraud.  This could have been New Scientist, Scientific American, Discover, or any of the other popular science magazines, but it wasn’t.  They were all scooped by an Indian publication, Open Magazine, that had only been running for a year.

The climate change fraud that is now unraveling is unprecedented in its deceit, unmatched in scope—and for the liberal elite, akin to 9 on the Richter scale.  Never have so few fooled so many for so long, ever.

The entire world was being asked to change the way it lives on the basis of pure hyperbole. Propriety, probity and transparency were routinely sacrificed.

Feb 2, 2010: the Australian abandons the IPCC and the ETS

The editors suggested for the first time that the IPCC’s reputation was so damaged, the government should re-examine the evidence.  This was a line in the sand that had not been crossed before, and the conspiracy tables were turned finally on the side of large funding, large institutions, and large vested interests.

Six weeks after Copenhagen, the IPCC report has been devalued by revelations of flimsy evidence and dodgy reporting. Many parts of the report contain solid science but that is not the point. It is increasingly impossible for governments to unquestioningly construct policy based on a report now so compromised. A fresh look at scientific data on climate change is needed before politicians can ask taxpayers to embark on schemes that could lead to trillions of dollars of lost wealth around the globe in coming decades.

… Australians deserve to see the evidence re-examined and tested before being asked to support major economic restructuring designed to manage global warming.

The past few weeks suggest the real conspiracy is between sections of the media; green advocates; business groups that signed up to the CPRS; and corporates set to make money from a carbon market – all of whom seem uninterested in revisiting the evidence, even though the ground has shifted. It is now apparent China is unlikely to put a price on carbon any time soon, opening the way for Australian jobs to be exported there if we go ahead with a carbon market. Do we really want to commit Australia to that path before we know more about the IPCC fallout?

The myth is so over, that analysis of how it fell has already begun:

When Climategate broke, the mainstream media, like knights facing archers at Crécy, mostly ran dismissive pieces reflecting the official position of the Consensus. For example, they dutifully repeated the line that the University of East Anglia’s global temperature record was vindicated by two other ‘entirely independent’ records (from Nasa and NOAA), which was bunk: all three records draw from the same network of weather stations. Editors then found — by reading and counting the responses on their blog pages — that there was huge and educated interest in Climategate among their readers. One by one they took notice and unleashed their sniffing newshounds at last: the Daily Express went first, then the Mail and the Sunday Times, last week the Times and this week even the Guardian.

The Indian government has established its own body to monitor the effects of global warming because it “cannot rely” on the United Nations’ Intergovernmental Panel on Climate Change, the group headed by its own leading scientist Dr R.K Pachauri.

Feb 4, 2010: Greenpeace tries to throw Pachauri off the gravy train

John Sauven, director of Greenpeace UK, called on the Indian academic to be replaced to rebuild the “credibility” of the UN’s climate change body.

The Australian goes with an opinion piece by Christopher Pearson.

What we are witnessing, in defiance of officialdom, government propaganda and the bulk of funded researchers in the field, is the collapse of a scientific paradigm. This is something that has never happened before. Politically speaking, it’s a game-changer with the potential to overturn the normative assumptions commentators rely on.

In the latest edition of The Spectator, Matt Ridley, a veteran science journalist, offers an explanation for how the consensus came unstuck. “Despite 20 years of being told they were not just factually but morally wrong, of being compared to Holocaust deniers, of being told they deserved to be tried for crimes against humanity, of being avoided at parties, climate sceptics seem to be growing in number and confidence by the day. What is the difference?

And Christopher Pearson even mentions this blog.

The task is not over

Many major dailies have not yet noticed the quicksand opening up to swallow their scientific reporting.  A significant slice of the population has been trained to call people names: “deniers”.  A whole generation of environmental science reporters are still being spoon-fed PR from the bureaucracy and vested interests.  Worse, they still think it’s “journalism” to repeat press releases without question.  Roughly one-third of the people still believe the myth of the scientific “consensus”.  But, one-third are wide awake, and telling their friends.

Pressure on governments is still strong.  The Indian Government has since announced it supports Dr Pachauri, and the millionaire from the highest caste has claimed he is an easy target because he “represents the poor”.  Sure.  The Indian renewable energy minister compared Pachauri to Ghandi, whose opponents “were British” (like Christopher Monckton).  And the Age printed all that with a straight type-face.

The myth is unravelling, and I thank everyone who was part of the team: everyone who put a comment on a blog exposing it, or rang a radio station, or wrote  a letter to a newspaper, or who phoned a politician.  We can all feel ever so slightly reassured that even the best dam walls money can buy, enforced by social pressure from the politically correct, and enthusiastically reinforced by the mainstream media, were chipped away, and eventually fatally weakened, by thousands of little hammers.

Thank God for the Internet.

Ed D has claimed that the dam shown above is suffering from low water levels due to drought caused by man-made climate change. Like all claims of this sort, it’s based on climate model predictions from models that have been falsified (there is no hotspot) and there’s no empirical evidence to back it up. As it happens the trend in droughts across the US shows no correlation with CO2 levels. Man-made CO2 didn’t start to rocket until after the monster droughts of the 1930’s and 1940’s.

Droughts across the US (from the NCDC via, hidethedecline.eu)