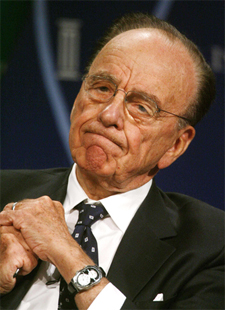 Three years ago Rupert Murdoch was promising to make News Corporation carbon neutral. He implored his staff to personally reduce their footprint, and to be more creative in convincing the world to act too. He created websites specifically to help spread the message about the need to reduce carbon emissions. And he even bought a hybrid car for himself.

Today Quadrant magazine reports what many of us have been speculating behind the scenes: Murdoch has realized the IPCC and the “consensus” are fake.

The Australian has performed best in giving space to sceptics and dissenters but has stuck to the save the planet line in its editorials, some say because Murdoch said so publicly. Yet in a personal communication with Murdoch he indicated his scepticism to me. Last Friday’s editorial moved in the right direction when it called on politicians to question the science used by the IPCC but it has yet to endorse the call for an independent inquiry by a number of Australian scientists.

Rupert Murdoch is unarguably one of the most powerful men on the planet. This is an edited extract of what he said in May 2007 in the first ever global webcast to News Corp’s employees. It’s strong stuff. The whole speech is here, and it’s got detail after detail about how News Corp was acting to reduce its carbon footprint. They were being aggressive, efficient, and effective. If carbon was a problem, Murdoch’s actions would seem unimpeachable. But that’s just it — the job of the free press is not to “convince the world of a policy”, but to inform the world of what’s happening, to report “the news, the whole news, and nothing but the news”.

I’m not suggesting that he has been overtly dictating exactly what can and can’t be covered by News Corp. Fox News after all has been a shining light for people with sceptical views. But it can’t be argued that the directive at News Corp was always “News First: Propaganda Second”.

Could it be that Murdoch is simply one of the wiser businessmen–and instead of controlling the editors, he allowed some true freedom of editorial in all his media outlets? Could it be that he then listened to them all and found Fox more convincing?

If so, it’s an example of the free market at work, in money and ideas, and I’m relieved to know it still happens. I’m frustrated that it has taken so long for media outlets to begin to report what was so obvious to anyone who investigated the matter with an unjaundiced eye, and that the world came perilously close to adopting a trading mechanism that was irreversible, massively far-reaching, and potentially gave parasitic financial houses and big government even more power than they already have.

My concern with large media conglomerates is that there is so little competition. When money is created from nothing (and bank loans are virtually foisted upon anyone who glances backwards at a bank), it makes it almost inevitable that large corporates would take over other large corporates — generating these megaglomerates. An economy dominated by a few large companies is a more fragile ecosystem, because it lacks diversity and depth.  The sprawling conglomerates that emerge had to borrow buckets of money to eat their competitors, so the power and influence of their financial backers is enormous.

Companies that ought to expose corruption are owned by organizations that benefit from it.

Companies that ought to have exposed the climate corruption, like Reed Publishing (New Scientist), News Corporation, even Shell Petroleum, are in the end, like almost every corporation, deeply in debt to a string of financial houses–and those financiers, as a class, benefit from a carbon credits trading system.

This applies especially to News Corp. The Murdoch family only own about 30% of the voting stock, barely enough to maintain control. News Corp cannot raise money by issuing more shares, or the Murdoch’s risk losing control of the company. That leaves borrowing as the main means of raising more capital. For a couple of decades News Corp has been growing aggressively by acquisition, fuelled by borrowed money — so it is more beholden to its financiers than most companies.

Where are the news media that are driven by subscriptions first and foremost? Which media outlets are there to serve the public, rather than other entities?  Polls and subscriber numbers count, but realistically, when all our major dailies here in Australia are owned by Murdoch or Fairfax, what choice do we have? Which “other major national daily” would I switch too?

We need a better system of managing our free press. Without the internet, the money-masters would have surely have got their trading system based on nothing but thin air.

It looks like we may have just got lucky, fortunate that one of the megalithic entities is managed by a man willing to let them speak freely, even as he encouraged them to proselytize.

When it comes to exposing the power-brokers of global humanity, I don’t like relying on “luck”.