There are 2014 updates on this topic:

There has been a change in direction by the alarmists, as shown by their new “Synthesis Report.” The independent scientists noticed it during the Wong-Fielding meeting.

The alarmists have abandoned air temperatures as a measure of global temperature, because the air temperature graphs are just too hard to argue with (like the second figure below, from the Skeptics Handbook). Instead they’ve switched to ocean temperatures, which they often disguise as ocean heat content (a huge number like 15×10²² Joules sounds much more scary than the warming it implies of 0.003° C/year).

All three pages of the Synthesis Report that deal with ‘evidence’ are about factors or trends that tell us nothing about whether or not the warming is due to carbon emissions. If God put the galaxy in a toaster, sea levels would rise, ocean heat content would increase, and ice would melt. 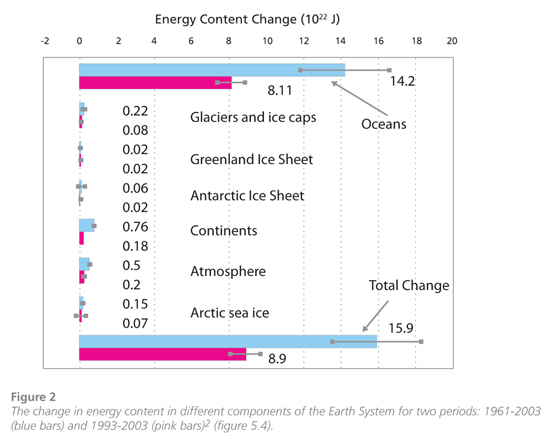 Notice how the graph above from the Synthesis Report that came out this month doesn’t include the last six years of data? Carrier pigeons from the remote worldwide network of Argo buoys make it back to base eventually, but the world’s leading team of climate researchers seem to have trouble googling “argo”. Not coincidentally, measurements of ocean heat capacity from 2003-2009 aren’t the numbers Team AGW were looking for. Indeed Craig Loehle has calculated the ocean has lost about 10% of the gain listed above since since 2003. (More info here).

It’s clear on the graph that the planet’s air barely counts (don’t mention the troposphere, or ‘hot spot’? What hot spot?). So now it “doesn’t matter” if air temperatures stay flat like this:

They’re right on one point: ocean heating trumps atmospheric heating for heat content. But how awkward for them that, with the new Argo data, no one can find any warming in the ocean either?

The new litany is that ocean temperatures are rising and rising fast. The evidence of the last five years contradicts them, so don’t look too closely; and don’t look from too far away either, or you won’t see the rise since 1960. But with the US climate bill and Copenhagen coming up, they only need to confound and confuse the issue for six months.

All the public education we did with air temperatures now starts all over again with ocean temperatures.

David Evans summed it up in an email today:

1. Ocean temperatures can only be adequately measured by the Argo buoy network (Wikipedia). Argo buoys duck dive down to 700m, recording temperatures, then come up and radio back the results. There are 3,000 of them floating around all the world’s oceans.

2. The Argos buoys have only been operational since the end of 2003. Since then they show a slight cooling: 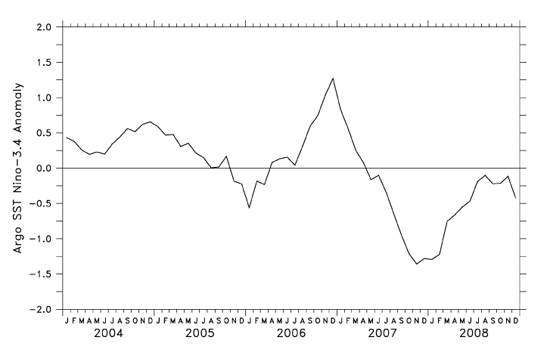 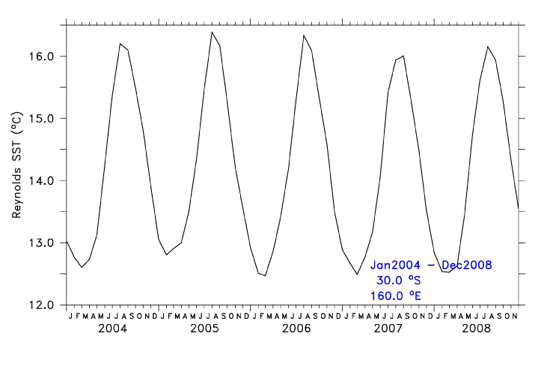 3. Josh Willis, who runs the Argos buoy program, said in March 2008:“There has been a very slight cooling, but not anything really significant”
4. The Argo buoys initially showed definite cooling, but were recalibrated in 2007. After recalibration they showed slight warming, but now show slight cooling (PDF).
5. The Argo data shows that the AGW hypothesis is wrong, because temperatures are definitely not rising as fast as predicted by AGW: see William Di Puccio.
6. Before the Argo network we used bathythermographs (XBTs) to measure
ocean temperatures. Those records are inadequate both for depth and geographical coverage.

This graph gives an alternative view that fits the data better (thanks to Akasofu).

The little ice age in the 1600s and 1700s was obviously not caused by humans. Since 1750 the global temperature has been recovering, with alternating warming and cooling periods of about 30 years each around a steady underlying warming trend. Human emissions of CO2 were negligible before 1850, and before 1945 they were insignificant compared to today’s emissions.

The climate models were trained by assuming that nearly all the warming since 1750 was due to rising CO2 levels. This assumption underpins all of AGW. Therefore if there were other causes of warming coming out of the little ice age, then (1) the models overestimate the sensitivity of the climate to CO2 and (2) their predictions of future warming are exaggerated.

And where did the extra CO2 come from before 1950? High school chemistry: a warmer ocean releases more of its dissolved CO2 into the atmosphere.

The Fielding-Wong meeting spawned a brief email debate between climate heavyweights. The alarmist started it by patronizing Fielding’s independent scientists, but it seems that when you call the bluff of a government funded alarmist scientist and put a direct question you don’t get a direct reply — only evasion and arrogance.

BTW, climate alarmism is a paper tiger — there is no evidence (PDF).

[The full set of official and unofficial documents arising from the Wong-Fielding meeting are all listed and linked to here.]